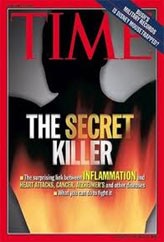 Medical research has found that many of the chronic and debilitating diseases of our time have the same cause: chronic inflammation.

Scientists now realize that pain and disease arise in our bodies where an inflammatory response has taken place, but the inflammation has not completely stopped after the healing process.

A low level of chronic inflammation can continue for years, damaging normal tissues and wasting energy. Inflammation has been linked to nearly every degenerative disease you can think of — cardiovascular disease, diabetes, arthritis, glaucoma, autoimmune disorders, cancer and many more, all of which have skyrocketed in modern societies in recent years. One overlooked reason for this situation is that the immune system began functioning less efficiently as humans increasingly separated from the Earth’s energy.

Inflammation is a natural complex biological response of the body to harmful agents such as pathogens, toxins and damaged tissue. It is a protective response of the body so that it can eliminate threatening agents as well as start the healing process. The white blood cells (WBCs) of the immune system use positively charged molecules, also known as free radicals, as a weapon to destroy harmful agents.

Free radicals, in an attempt to balance their positive charge, will strip a negatively charged electron from any living organism in its vicinity, thus destroying it. As the remedial work winds down, excess free radicals produced during the immune response, should be neutralized by anti-oxidants in the diet or available negatively charged electrons in our bodies. If there are not enough available, after the repair job is done, the free radicals will continue taking electrons but now from healthy tissue.

The immune system goes into overdrive sending in more WBCs that produce more free radicals that will take electrons from healthy tissue and on and on this vicious cycle continues. The acute inflammation which was needed for the original problem has now become chronic inflammation.

The Earth is a natural and easily available source of electrons. Regular earthing helps to neutralise the build-up of free radicals, significantly reducing inflammation in the body.

Read more about the research into the effects of earthing on inflammation.

Select Afterpay as your payment method

Use your existing debit or credit card

Complete your checkout in seconds

All you need is:

1) A payment card; 2) To be over 18 years of age; 3) Resident of country offering Afterpay